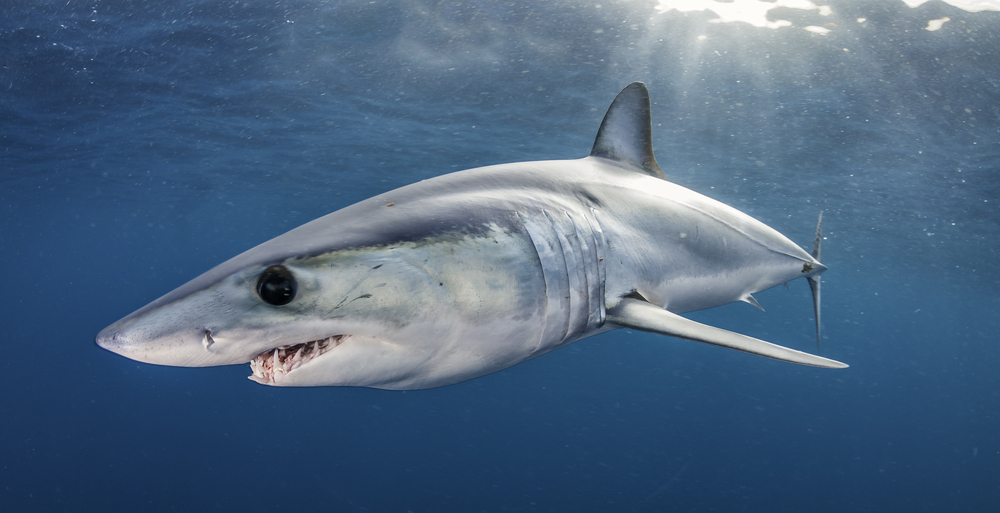 Superpowers: Nose is used as a weapon, camouflages with sandy bottoms

The snouts of these sharks can bear up to 45 serrated teeth and make up 20% of their body length. Their snouts are used not only as weapons when prey is hunted, but also to detect prey. On the underside of the ‘saw’ are organs called ampullae of Lorenzini, which are electroreceptors that detect the electric fields of possible prey. Once they spot prey, they use their snouts to immobilise the victim. Sawsharks are usually observed close to sea bottoms and camouflage accordingly; they are hard to spot when they swim close to the sand.

Frilled sharks possess 25 rows of 12 backwards-facing teeth, making it a total of 300 teeth. The angle of the teeth ensures that once prey is captured it doesn’t escape from the shark’s grasp. They use their teeth not only to chomp up prey, but also to lure the prey into their reach. The frilled shark’s teeth are in stark contrast with his brown body, making it a mechanism to attract the likings of potential prey. The anatomy of the frilled shark makes him naturally buoyant in the water, which makes it easier to swim since he doesn’t possess fins like other sharks.

Little is known about these sharks, as they were only discovered in 2010 and confirmed to be a new specimen in 2015. They obtained their name because of the colour of their bodies, which blends into the deep-water surroundings. Their name is also suggested by the few photophores (an organ that emits light) they possess in comparison with other lanternsharks. It is perceived that ninja sharks emit just enough light to hide their shadows, which is used as a camouflage technique.

These creatures are known by many names, ‘vampire shark’ being one of them. They received this name because they hide away from light. Goblin sharks are not as scary as they look; there have been no reported incidents with humans. Nonetheless, they do look a bit freaky and coming across one of these is sure to send you swimming in the other direction. They are hard to spot due to their colour, which enables a goblin shark to blend in with his surroundings. He sweeps his nose back and forth over the seabed to pick up the electrical fields of prey.

Superpowers: Almost 360o view, lives for up to 20 years

You can’t mistake these bad boys when you come across them. They are known for their T-shaped heads, which makes them unique among other sharks. The head of the hammerhead is beneficial when searching for prey; he can even see under his own body. The view of a hammerhead is almost 360° – he can’t see the centre of his nose.

Shortfin mako sharks do not have any predators within the ocean, so they live a peaceful life in the wild. The fastest of the sharks, shortfins are capable of speeds of up to 35km/h and sudden bursts of speed of up to 80km/h. This means that the shortfin can outswim almost any living creature. Keeping their speed in mind, it comes as no surprise that these sharks can travel far in a short time. It’s known that they swim about 2,092km in just over a month.

AKA: Dustbin of the ocean

Tiger sharks are considered the world’s second-most dangerous sharks. They have a strong sense of smell and sharp eyesight, which ensures that most of their hunts are successful. Their strong teeth, which they possess 24 rows of, give them the ability to bite through almost anything, including turtle shells. It is known that human garbage, such as number plates and plastic bags, has been found inside the tiger shark’s stomach. Nothing is safe when it comes within a tiger shark’s reach

The bull shark is well named – one of the reasons being his bad temper when it comes to territory. A bull shark is aggressive and will attack almost anything that wonders into his terrain. Luckily, he will give a warning before he bites – when a bull shark bumps his snout into something, beware, the next encounter might not be without blood. They are known for having the strongest bite of all the sharks. These creatures can survive in fresh water and some have been observed in rivers and lakes. Don’t think that you are safe from him in shallow fresh water: some have been witnessed to survive in as little as 60cm of water.

Whitetips are curious sharks and usually investigate any alien objects, but they will back off when they feel threatened. However, if these objects are vulnerable, the sharks generally carry out a sneak attack. They are known to follow ships around and typically feed on shipwreck survivors. Unlike most sharks, they are known as slow swimmers. But don’t let that fool you: they are capable of rapid bursts of striking speed.

Great whites are the largest predatory fish, yet they are not apex predators. The killer whale is the only known enemy of the great white. These sharks can smell a drop of blood from 5km away. They swim at 24km/h, which means within about 12 minutes a great white will be at the location of the blood, presuming that he is 5km from the site. Another interesting thing about these bloodthirsty creatures is the fact that they are warm-blooded, making them rare compared to other fish.

No spam, notifications only about new products, updates.
PrevPrevious10 Monstrous bugs that are freaky
NextWhen your peanut allergy is life-threateningNext
On Key