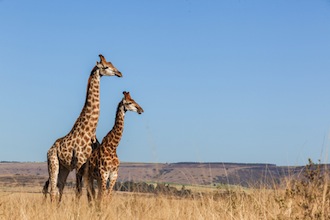 The giraffe is the tallest mammal in the world. His long legs and neck do make drinking difficult though. To get to water, he needs to spread his front legs and crane his neck down at an awkward angle, a position that leaves him clumsy and vulnerable to predators such as crocodiles.

Even the giraffe’s tongue is extra large. It can be up to 45cm long and is specially adapted to allow giraffes to forage on trees that other animals would avoid. They also use their tongues to clean their own ears.

Many of you have probably seen pictures of two giraffes gently rubbing their necks together. It looks adorable and compassionate, but in retrospect this act is far from friendly. It’s called necking, and it’s usually done by male giraffes as a test of strength. The giraffes bang, twist and rub their necks together to see which of them is stronger.

It is possible to identify the sex of the giraffe by the horns on his head. Both males and females have horns, but those of the female are smaller and covered with hair at the top. Male giraffes may have up to three additional horns.

Giraffes are ruminants. This means that they have more than one stomach. In fact, giraffes have four stomachs.

The first part of their scientific name, Giraffe camelopardalis, means ‘one who walks quickly’, while the second part translates as ‘a camel marked like a leopard’. Giraffes belong to the family Giraffidae, which has only one other species, the okapi.

Giraffes can often be seen with small, winged passengers perched on their backs. These birds are called ‘oxpeckers’ or ‘tick-birds’ because they eat the ticks off animals, including giraffes. The birds get fed, and the giraffes rid themselves of parasites.

As their scientific name suggests, giraffes do not only walk swiftly, but they also run at a quick pace. They have been recorded running as fast as 56km/h. Since giraffes tire easily, they are unable to sustain these high speeds for very long, but can use these brief spurts of speed to help evade predators.

Newborn giraffe calves begin their lives by falling 1.8 metres to the ground. Amazingly the baby giraffes can stand within half an hour and after only 10 hours can actually run alongside their family

No spam, notifications only about new products, updates.
PrevPreviousWorld’s 10 most expensive dog breeds
NextWildcatsNext
On Key