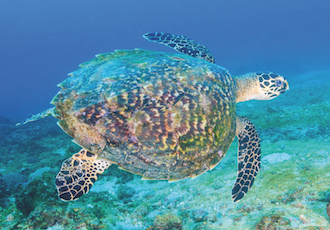 Hawksbill turtles are medium-sized sea turtles. Adults are usually 76 to 90cm long and weigh between 45 and 91kg. Their skin is covered in thick, overlapping scales that are called scutes. The scutes are usually amber-coloured and richly patterned, with radiating streaks of lighter brown and black.

Female hawksbills nest on beaches. They lay about 130 eggs at a time. They will go back out to sea for 13 to 16 days before laying another batch. Hatchlings spend their first one to three years at sea.

The hawksbill sea turtle gets his name from his distinct beak-like mouth. A hawksbill’s head tapers to a point and his lower jaw is V-shaped, adding to the hawk-like appearance.

Marine turtles can locate translucent jellyfish at the surface of the ocean and identify sharks as potential predators. Understanding sea turtles’ basic sensory abilities will aid in mitigating many of the hazards they face around the world.

The seven sea turtle species that grace our oceans belong to a unique evolutionary lineage that dates back at least 110 million years.

Males and females generally come together only to mate. Then the female will clamber onshore to the nesting beach, drag herself onto the sand during the night, dig a nest for her eggs, and cover it with sand. The babies hatch during the night about two months later and make their way to the water’s edge.

Hawksbills are a chief source of decorative tortoiseshell, used for jewellery as far back as the Nubian rulers of Egypt and China’s Han Empire.

Many organisations are working to save sea turtle species around the world by focusing on the protection of key habitats through research, training and community outreach. In Africa, the WCS Ocean Giants Programme works in the coastal waters of Gabon and the Gulf of Guinea to ensure petroleum exploration and extraction do not endanger hawksbills and other sea turtles.

Hawksbills help maintain the health of coral reefs. As they remove prey such as sponges from the reef’s surface, they make it safer for reef fish to feed. They also have cultural significance and tourism value.

Hawksbill turtles occupy a large range that stretches throughout all but the world’s coldest waters. They travel hundreds of miles between feeding and nesting grounds. Major nesting grounds are in the Indian Ocean, Caribbean Ocean, Australia and Indonesia.

The full article appears in the April 2015 issue of AnimalTalk.

No spam, notifications only about new products, updates.
PrevPreviousWildcats
NextThe PumaNext
On Key