The Caracal – An African hunter 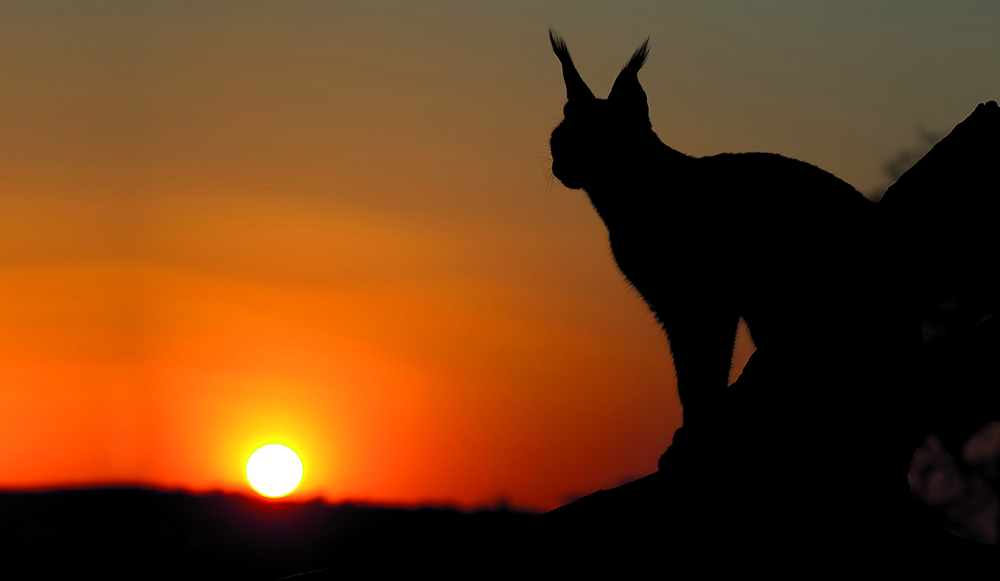 The caracal may not be large in stature, but this cat is a formidable hunter, able to take down prey far bigger than himself

[dropcap]D[/dropcap]id you know that the caracal is called the rooikat in Afrikaans? Named for his plush, reddish-brown coloured coat, this cat has distinctive dark strips that run from his eyes down his nose. The tufts, or tassels, on his ears distinguish him from other medium-sized cats.

The caracal has a keen sense of hearing and 29 muscles are used to rotate his ears to catch the sounds of his prey. He is known for his remarkable ability to spring 3m into the air where he has exceptional timing, balance and precision. He is able to take a bird in mid-flight or spring and secure prey on the ground. He is the fastest cat of his size.

What’s in a name?

The name ‘caracal’ is derived from a Turkish word meaning ‘black-eared’. The caracal is sometimes called the desert lynx, but his closest relatives are the serval and African golden cat. He is not related to the lynx found in North America, Europe and Asia. The caracal is a more slender cat than the true lynx, with longer legs and a longer tail.

Caracals are solitary cats, with the males having much larger territories than the females. They protect their territories by scent-marking on trees, bushes and logs. They also leave their faeces where it can be seen by other cats. In southern Africa, breeding takes place in the summer months from October to February, with a gestation of around 80 days. The mother caracal will make a den in an abandoned burrow, where up to six kittens will be born. The mother will suckle her young and introduce them to meat at around two months old. They stay with mom until they are a year old. Caracals are nocturnal. They hunt at night and target prey like rodents, hares, monkeys and even birds. They will also take down prey four times their size and hide their kill out of sight in the branches of trees.

Caracals have been classified as ‘problem animals’. This is a term given to damage- causing animals, most commonly in terms of predators who prey on livestock. In essence, the animal is doing what comes naturally to him – targeting prey to satisfy his hunger. If stock is left unattended, the caracal may see them as a viable meal. Some farmers use traps or poison to kill problem predators.

The Cederberg Caracal Project started in 2012 in collaboration with the Cape Leopard Trust. The project, based in the Cederberg Mountains, focuses on caracal behaviour and aims to improve the current knowledge scientists have on these elusive animals. Dr Quinton Marais, founder and CEO of the Cape Leopard Trust, says that the work is integral to the understanding of predators in the ecosystem and also how meso-predators (medium-sized predators) are affected by apex predators in the environment. “Ultimately, one of the key aims is to generate sufficient data to contribute to the mitigation of farmer-predator conflict and minimise the associated loss of biodiversity through various management methods,” says Dr Marais. “We are also further exploring caracals in the urban complex. This is very exciting work, which delves into not only caracal ecology, but also genetics, effects of landscape fragmentation, toxicants and human-habitat associated diseases.”

Dr Marais urges farmers to keep their livestock protected. “This is the best solution as it resolves not only predator issues, but also livestock theft. We think livestock guardian dogs may work well in many cases, particularly if used in the traditional way with herders, and we are currently testing this in a two-year experiment.”

If you would like to learn more about the caracal projects, or donate, visit the Cape Leopard Trust at www.capeleopard.org.za.

No spam, notifications only about new products, updates.
PrevPreviousA to Z on pet care (Part 2 of 3)
NextIs the Chinchilla right for me? (Part 1)Next
On Key