The many diverse and exceptional skills peculiar to other animals are customarily and unfairly dismissed as merely ‘instinct’. Yet it ought to go without saying that what we call ‘instinct’ is really innate intelligence, consisting of qualities that vary not only between, but within all species, and which may be developed by association and nurture in tandem with natural evolution, as in the case of domestic animals.

Survival skills are a form of intelligence

The survival of animals is of course dependent on their ability to find adequate food in their environment in the most energy-efficient way. To a degree determined by specific circumstances, animals moving from a wild to a domestic or semi-domestic state rely on the supply of food from the human, in addition to hunting, as requirements demand. We have proof of the success of this dual strategy in the cat when we look at the size of both the feral and the pet cat population.

So what can cats do? 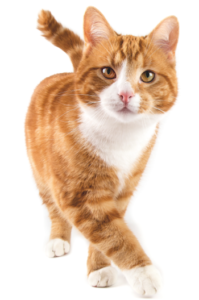 1. They can solve problems

Another attribute of cat intelligence long unacknowledged and thought to be exclusive to primates, is the ability to combine a learnt skill with insight in problem-solving. These are known as ‘learning sets’.

We have so much yet to learn about cats, but some recent intelligence tests provided exciting answers. For example, cats were taught to press their noses against certain objects in return for a treat. The object was then placed in a cup, taken behind a screen and secretly removed, and the cup returned empty. When the cats were released, most proceeded straight to the screen to seek the missing objects. The trials were made more complicated, and still the cats were able to solve many of the problems that were posed.

2. They always land on their feet

Cats display incredible balance and agility thanks to the fact that their hind-brain is highly developed. They also have a superior message system between the end of their spinal cord and brain, while their inner ear (where balance is controlled) is also highly developed. Their small size and light bone structure also help to improve their agility and balance.

3. They can tell time with great accuracy

We know that cats have acute hearing, but trials show that they also have the ability to discern minute differences in the duration of a sound. In a test, cats were restrained for either four or five seconds. Depending on the length of the restraint, the subjects were given a treat from a feeder either to their left or right. They were found to be able to distinguish which feeder to approach for the food, dependent upon the fractional differences in duration of restraint that preceded release. Thus, we see that they have an internal clock that can time events with astonishing accuracy.

What else can cats do?

See the full article in the June issue of AnimalTalk to find out!

No spam, notifications only about new products, updates.
PrevPreviousCats in the city
NextKZN Cat Club show resultsNext
On Key