Catslife- Walking on the wild side 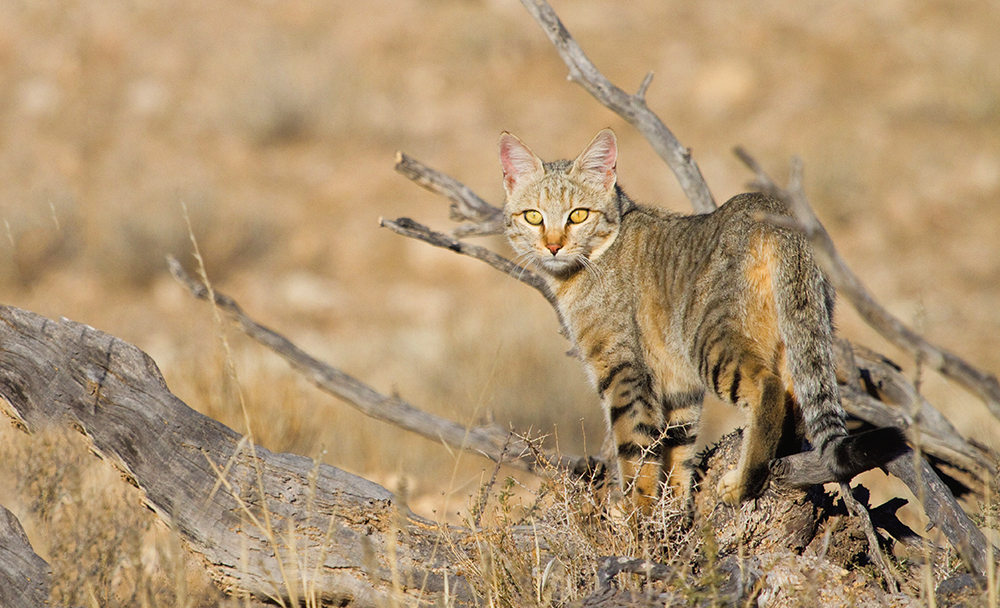 [dropcap]I[/dropcap]t’s twilight in the bushveld and darkness is closing in. A small cat, much like a domestic cat, makes his way down to the water’s edge. Tentatively he drops his head to drink. It’s a rare sight and you would be forgiven for thinking him out of place in this wild environment, but the African wild cat is as wild as his ancient ancestors.

Historians believe that this species of cat is the ancestor of our domestic cats, first domesticated by the Egyptians as a way to control palace rodents. Felis silvestris is the scientific name of the group of wild cats to which many subspecies belong, including the European wild cat (Felis silvestris silvestris), a cat with thicker fur than his African cousins Felis silvestris cafra and Felis silvestris lybica.

The African wild cat has a similar body shape to the domestic cat, although somewhat larger and with longer legs. Females stand around 35cm at shoulder height, with males quite a bit bigger. His short fur is greyish brown in colour, with tones varying from yellow through tan and distinctive black bands on his tail. He has a white belly area and black bands across his legs. A reddish tint behind the ears is a distinct characteristic of a pure wild cat.

African wild cats are solitary by nature and mainly nocturnal, although they may be up at sunrise or active at twilight during rainy periods or the winter months. Prey consists of small animals including reptiles, rodents and other small mammals, birds and amphibians. Like the domestic cat they are avid climbers, but are most often found on the ground. They may be small in stature, but they can be fierce and will put up a fight to protect their territories and their young. Males and females mark their territories with urine to alert other cats of their presence in the area and also bury scat, much like our domestic cats. Many of the traits and behaviour we see in our cats at home come directly from these wild ancestors.

DNA comparisons reveal that cats were domesticated from species of the wild cat. Cats were revered in Egyptian society and even worshipped. Cats were a prized symbol of grace and some even received mummification in death. The Sphinx is a representation of the lion, immortalised in early Egyptian art and a symbol of Egyptian society. Cats were kept in the palace to keep vermin and snake populations down. They were also kept in Egyptian granaries to stop rodents from eating the grain. Shorthaired cats spread across Europe from Egypt, while cats with longer coats are believed to have originated in eastern European countries like Persia (now Iran) and Turkey.

Mating occurs in the cooler winter months and gestation lasts around 56 to 69 days. Dens are made in rocky outcrops, hollowed-out tree trunks or abandoned dens of other animals. Kittens may be born through the spring and into late summer when there is plenty of prey around. Two to five kittens are born in a litter and require full parental care from their mother. They live under her care for around six months, and will gain their independence after they learn to hunt for themselves.

African wild cats may be predators, but due to their small size they are also prey for other species like raptors and larger mammals like jackal, leopard, lion and the African wild dog. African wild cats, along with caracal and jackal, are often labelled as ‘damage-causing animals’ in rural settings where livestock may be preyed on, and may be victims of poisoning and traps.

Habitat loss and hybridisation with domestic cats are two main threats to the species. Scientists are trying to identify areas where African wild cats are still genetically pure and identify areas where hybridisation has occurred. They collar the cats and track their movements to obtain valuable data. When African wild cats do breed with domestic cats, they produce fertile offspring, which is a cause of concern for scientists as it is a threat to the genetic integrity of the species.