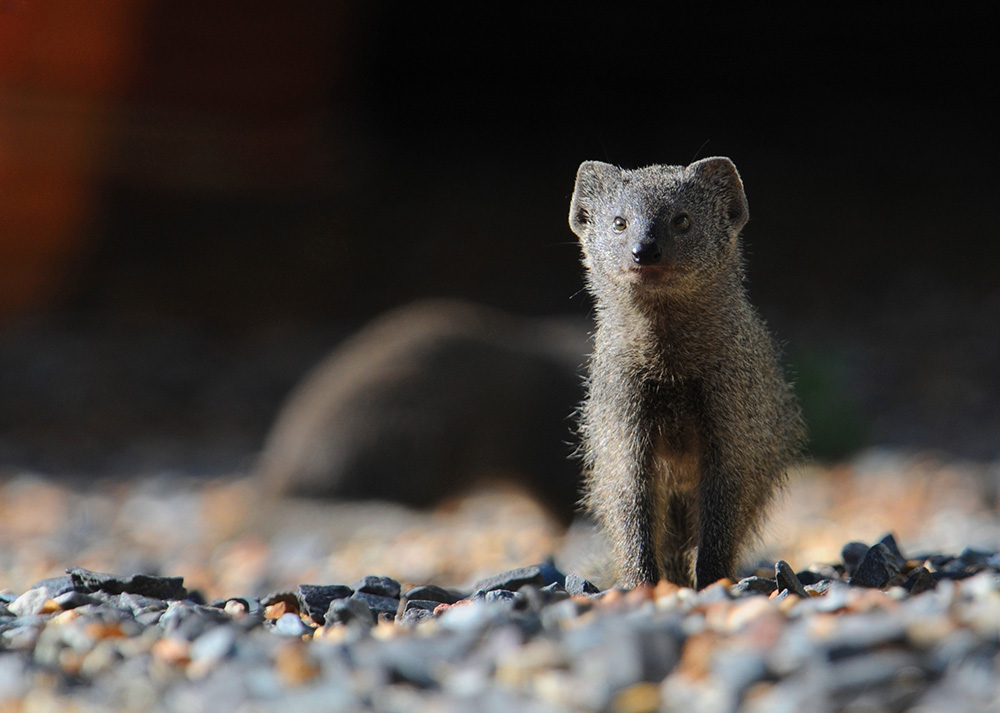 1. Proudly South African The Cape grey mongoose (also sometimes called the small grey mongoose) is a small mammal indigenous to southern Africa, spreading from the Cape province to the western and eastern province, through Lesotho, to parts of the Free State, Kwa-Zulu Natal and even Mpumalanga. 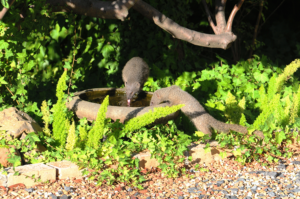 2. Spot the mongoosie Discovered in 1839, these little critters are usually found in forests and open  country, although they have adapted well to urbanisation. These days, they can often be seen dartingacross busy roads and foraging among the undergrowth close to residential areas.

3. Appearances may be deceiving While they may only weigh between 0.5 and 1kg, Cape grey mongooses can stretch up to 34cm in length, with equally long, bushy tails. They have pointed muzzles and are typically speckled, dark grey in colour. Interestingly enough, while the Cape grey mongoose has five toes (each with its own sharp claw), their tracks only show four toes. 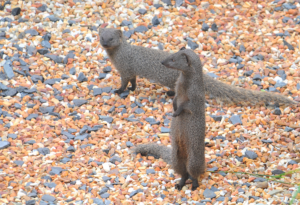 4. Family matters Though Cape grey mongooses are solitary creatures, they will pair up occasionally, mostly for breeding purposes. When mating, a mongoose makes a high-pitched noise known as giggling.Litters of one to three pups, born between August and December, will remain in the breeding burrow until they are fully weaned. Likewise, it is very rare to see females with their young, as pups will only emerge once they’re able to fend for themselves.

5.Smart as a whip With predators such as large birds of prey and snakes, camouflage is very important to the Cape grey mongoose. They will, wherever there is enough vegetation, take shelter in holes in the ground or under rock piles, tree trunks, dense undergrowth and the like. They will also opt to take shelter under buildings and stone walls from time to time, and will go as far as climbing trees in order to escape predators or to find food.

6.Mongoose be nimble, mongoose be quick The Cape grey mongoose is a shy, skittish animal who you’ll mostly find out and about during the day. They are super quick on their short, skinny legs and will usually move along existing tracks and paths, holding their tails close to the ground as they move. 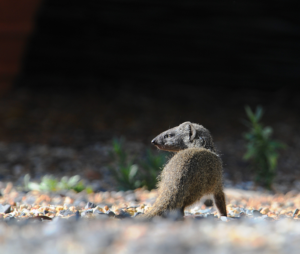 7.Skilled hunters They might seem tiny and fragile, but Cape grey mongooses are fully adept at hunting. Using a hunting technique similar to cats, they will crouch, stalk and pounce on their prey, delivering a deadly bite to the head. A mongoose will generally eat smaller prey in the side of his mouth, however, larger prey are handled a bit differently – holding it down firmly on the ground with his forefeet, the Cape grey mongoose will tear off small pieces with his sharp teeth before swallowing.

8.What’s on the menu?  The Cape grey mongoose mainly eats insects, although his diet also consists of rats and mice, small reptiles, ground birds, eggs and fruit. In captivity, they’ve been known to kill and eat puff adders, stalking and killing them with a bite to the head.

9.Distant relatives Did you know the Cape grey mongoose is part of the same scientific family(Herpestidae) as the meerkat? Besides the obvious similarities such as appearance and theirchoice of food, these two distant cousins are actually very different. For instance, unlike the timid Cape grey mongoose, meerkats are highly sociable, living in groups of up to 20 to 30 members 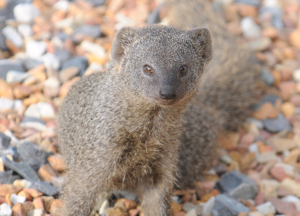 10.Monty the mongoose The Cape grey mongoose has even been used as inspiration for various children books. In these stories, written by Ali Corbett, the main character is Monty, a Cape grey mongoose living in the Kirstenbosch Botanical Gardens.

No spam, notifications only about new products, updates.
PrevPreviousWhat to consider before buying your first parrot
NextA to Z on pet care (Part 1 of 3)Next
On Key