10 Cool things about the grey wolf 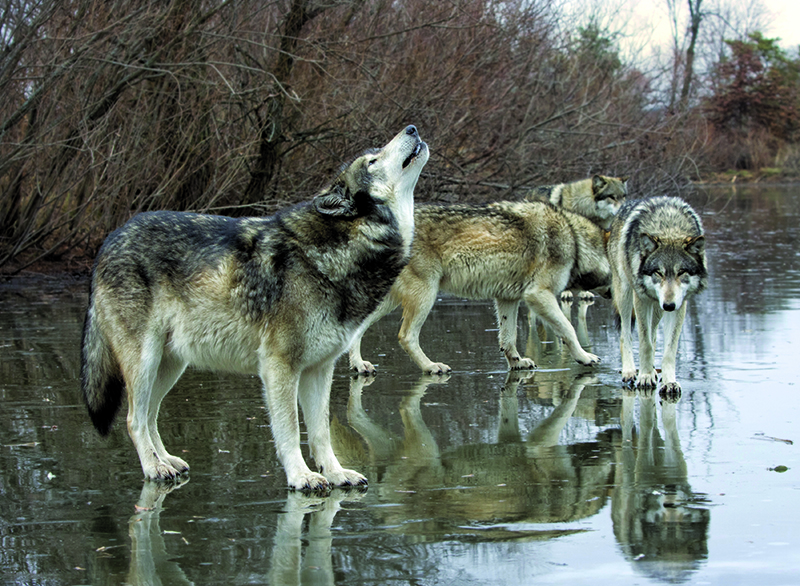 With 40 subspecies, the grey wolf boasts a relatively stable population and a widespread range (North America and Eurasia). The closest relative of our domestic dogs, grey wolves adapt well to a wide range of habitats.

The grey wolf can reach top speeds of 45km/h. Although this is not fast in the wild, he does get the upper hand by being able to maintain his top speed for a lengthy period of time. A wolf pack hunts together, allowing the pack to bring down large prey animals such as livestock and wild deer.

Another name given to the grey wolf is timber wolf, due to the terrain that he prefers. Forests and heavily wooded areas create great camouflage for the wolf to hide in.

There are about 12,000 grey wolves in the USA (Alaska and the lower 48 states) and as many as 50,000 in Canada. Other remnant wolf populations are scattered in Poland, Scandinavia, Russia, Portugal, Spain and Italy, but those numbers are dwindling due to human encroachment into the wolves’ natural habitat. Wolves find that livestock is more readily available than natural prey. The more natural habitat is lost, the more prey items are lost with it. 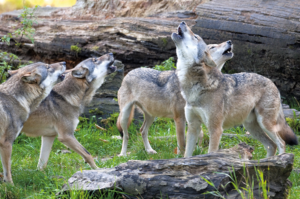 No two wolf howls are the same. A wolf’s howl is similar to a human fingerprint as it individualises each wolf in the pack. Wolves use different howls to signal different events such as danger or prey approaching.

Grey wolves are the closest relative of our domestic dogs (there is only a 0.2% difference between grey wolves’ DNA and that of dogs). An ancestor of today’s grey wolf was domesticated between 9,000 and 34,000 years ago. Wolf pups were taken away from the pack and tamed. Over a long period selective breeding produced much tamer offspring, who became our best friends. 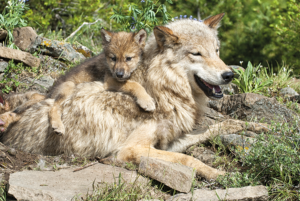 A wolf pack consists of an alpha male and alpha female, who both mate for life. A pack includes up to four generations from grandparents to grandchildren. Wolf babies are called pups and are born defenceless with their eyes and ears shut. The pups depend on the protection of the pack for survival and are most vulnerable when the pack is out hunting. A wolf can have up to eight pups in one litter.

Wolves are able to bring down prey that weigh up to 500kg and are known for devouring an entire carcass, leaving just a few bones. When a large prey item is killed, the wolf will over-eat as there is no certainty as to when the next meal will be available. A single wolf can eat up to 10kg of meat in one sitting.

When pups are too old to continue suckling from their mother, they will be growled and snapped at to encourage them to start looking at other means of food. While this process happens, the adults in the pack will regurgitate previously chewed food for the pups. Doing this gets the pups used to the taste of meat and encourages them to join the hunt in the near future.

The grey wolf is a strong, powerful animal (especially compared to his closest wild cousins, the coyote and golden jackal). He sports long legs, allowing him to move fast over rough terrain or in deep snow. He also has strong jaws, allowing him to crush heavy bones. 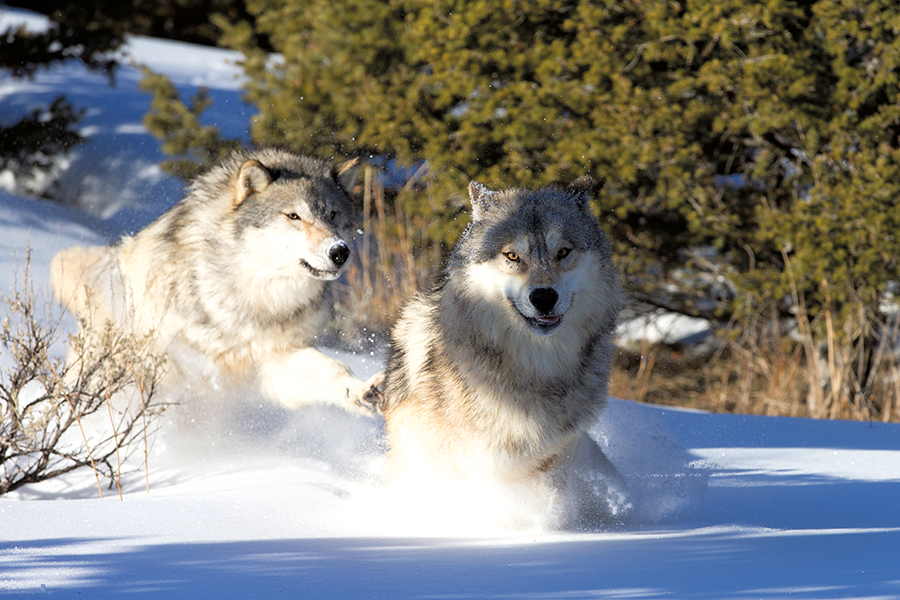 Only the alpha female and male may breed in the pack. This is done to ensure that pack numbers do not get out of hand. If a pack becomes too large, the youngest of the wolves may be kicked out to form another pack.

No spam, notifications only about new products, updates.
PrevPreviousDo dogs know calculus?
Next5 Things you should do for your chinchillaNext
On Key