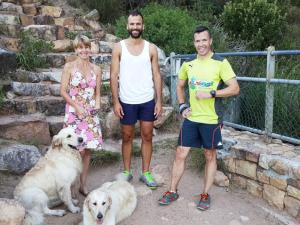 These wonderful heroes carried a 40kg dog down a mountain to safety. #AnimaltalkNews

Cape Town – Bella, a golden retriever from Newlands, often goes up Table Mountain with her mate Blue and her master Peter Shrimpton.

But on Sunday she walked on what must have been broken glass and cut three paws badly. This led to a painful ordeal – and a rescue by two Cape Town hikers who carried Bella to safety.

Now Bella’s owner wants to contact the two men, known only as Andrew and MJ, so he can thank them properly.

“I was so emotional when they eventually got Bella down, and my wife was in a state waiting for me on Tafelberg Road because I was hours late; I didn’t even get their surnames. I want to send them a case of wine, they were real heroes,” Shrimpton said.

He and his two golden retrievers went up Nursery Ravine on Sunday, then walked across to Kasteelpoort – a regular hike for the trio.

It was there that he noticed Bella lagging.

The hikers, known only as MJ (left) and Andrew, with Mandy Shrimpton, Blue and Bella at the bottom of Platteklip Gorge. Peter Shrimpton wants the two heroes to contact him.SUPPLIED

“Three paws were cut and covered in blood. We go up and down the mountain three times a week and this has never happened.”

Shrimpton realised that she was in too much pain to go back down Nursery Ravine, and would not have managed the ladders in Skeleton Gorge, so he elected to continue up Echo Gorge and head towards Platteklip, which ends up on Tafelberg Road. Shrimpton carried the 40kg dog at times.

“I coaxed her one rock at a time. The route would have taken us less than an hour, but it took us four. She really gave it everything she had, but she was in pain.”

At the top of Platteklip, Shrimpton thought of going to the cableway, but that involved a bit of uphill and Bella was not going uphill. He decided to go down Platteklip.

“She gave it everything she had, but eventually about a third of the way down we collapsed in a heap. I was going to meet my wife on Tafelberg Road and we were already hours late and I knew she would be frantic. I had no reception to phone, but sent text messages to my daughters at home and my wife, but my wife didn’t get them.”

Shrimpton knew his dog could not go on, but neither was he prepared for a night on the mountain, where the weather can change fast.

He was dressed in shorts and a shirt, and had no water, food, torch or warm clothing with him. He was exhausted and could not carry Bella any more.

“It was a very hard decision, but I left her.”

Weeping, he continued down Platteklip, when he came across two young men on their way up the mountain for a sunset hike. He told them of Bella’s plight, and they said they would carry the dog down.

“They told me to stay where I was. I waited for about 45 minutes, thinking they would not be able to manage Bella, and then suddenly they were coming around the corner, one of them with Bella over his shoulders. They took turns carrying her down. It was amazing.”

A vet has treated Bella and bound up her injured paws.

“I really want those guys to contact me so I can thank them. They are real heroes.”

No spam, notifications only about new products, updates.
PrevPrevious#AnimaltalkTeaser
Next#ThursdayHealthTipNext
On Key