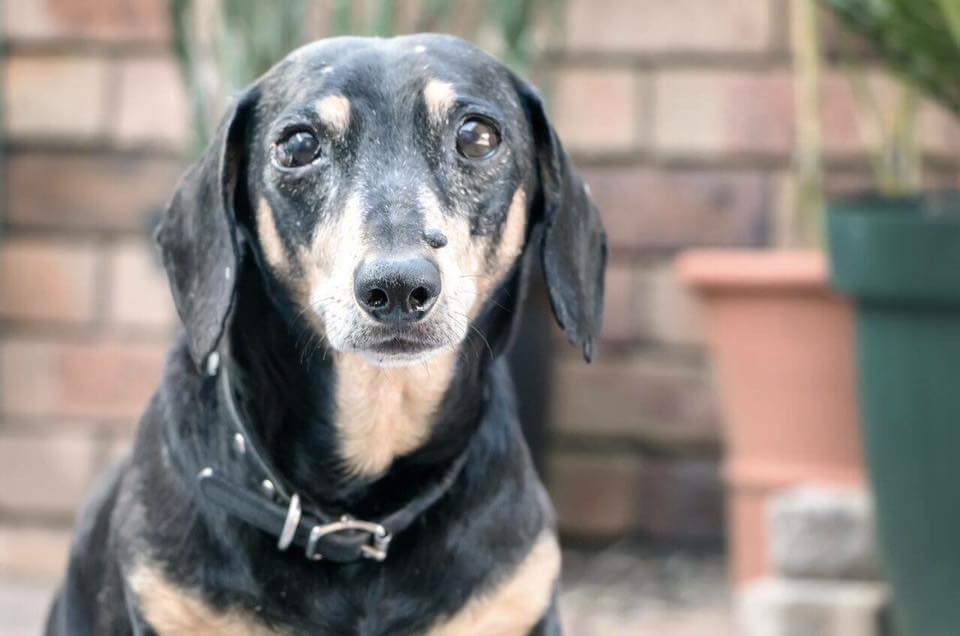 Stop all the clocks, cut off the telephone,
Prevent the dog from barking with a juicy bone,
Silence the pianos and with muffled drum
Bring out the coffin, let the mourners come.

Let aeroplanes circle moaning overhead
Scribbling on the sky the message He Is Dead,
Put crepe bows round the white necks of the public doves,
Let the traffic policemen wear black cotton gloves.

He was my North, my South, my East and West,
My working week and my Sunday rest,
My noon, my midnight, my talk, my song;
I thought that love would last for ever: I was wrong.

The stars are not wanted now: put out every one;
Pack up the moon and dismantle the sun;
Pour away the ocean and sweep up the wood.
For nothing now can ever come to any good.

Fifteen and a half years ago me and my friend Renier was driving and we saw a little Dachshund. We stopped, opened the door and he jumped in. That was Seun. He was hungry, scared, full of ticks and fleas. We took him home, gave him food and bathed him and he became part of our lives.

A few years later he was attacked by a large dog and almost died. He however made it. Almost two years ago I was very ill and could no longer afford to pay his medical costs. I put out a plea on social media and within minutes Carli arranged for a vet and drove from Johannesburg to assist me. Since then so many people have helped this creature. Seun became the official mascot of the largest bipolar network in the world, he became a symbol of hope for so many people and animals. Earlier this year on his 15th birthday he raised almost R46 000 for Wollies Animal Project. He became the driving force behind The H Project, a project that raised funds for numerous charities.

I was not allowed to keep Seun where I lived, so I kept him in secret for three years. Seun was diagnosed with an enlarged heart and a damaged spine. Carli, Lakota and Roxy arranged for his treatment. So many people, like Ann, Lynette, Sue and Celeste became part of his life.

Two days ago Seun was diagnosed with Gastro and this morning at 4h00 he passed away.

Seun was so much more than a dog. He was the guardian of my soul, the keeper of my heart. When I was so ill that I could not face the world he would lie next to me and just stare into my eyes and I knew all would be ok. He would early morning triple on the tile floors with his funny little walk to me in the office and then just lie next to me. He gave little whimpers of love whenever he saw me. Seun was not only a dog, he was an angel sent by God to protect me in my saddest moments. He was a symbol of hope for thousands of people and animals.

As I write this I am a broken man. I am sad beyond what my pen can explain. I know that Seun was loved, more loved than a dog can hope to be loved. I know this. But I am broken. I do not know where my comfort will come from now. I do not know how I will face tonight without him, or tomorrow or the day after.

What I do know is this, Seun came into my life with a reason. To save me, and that he did. He saved my life so many times. In return I will save the lives of dogs and animals for the rest of my life. That is my purpose, the purpose that Seun gave me. He made me into who I am. He has been a part of forming me into what I need to be and in his memory I will fight for animals until I breathe my last breath and meet him again.

Rest in peace Seun, Mamparra as I called him. Your heart and your soul is with God, and it is in me.

Thank you to everyone that was part of this precious life. I will remember that forever.

I do not wish to speak to anyone, I do not wish to face anyone. I will answer all messages in due course. I will now mourn this being, this Angel from God on my own. My social media is now quiet, my pen now is dry. I do not have words other than –

Rest my dear precious Seun. Your daddy loves you more than life. You were and always will be my life.

Seun, the guardian of my soul, the keeper of my heart.