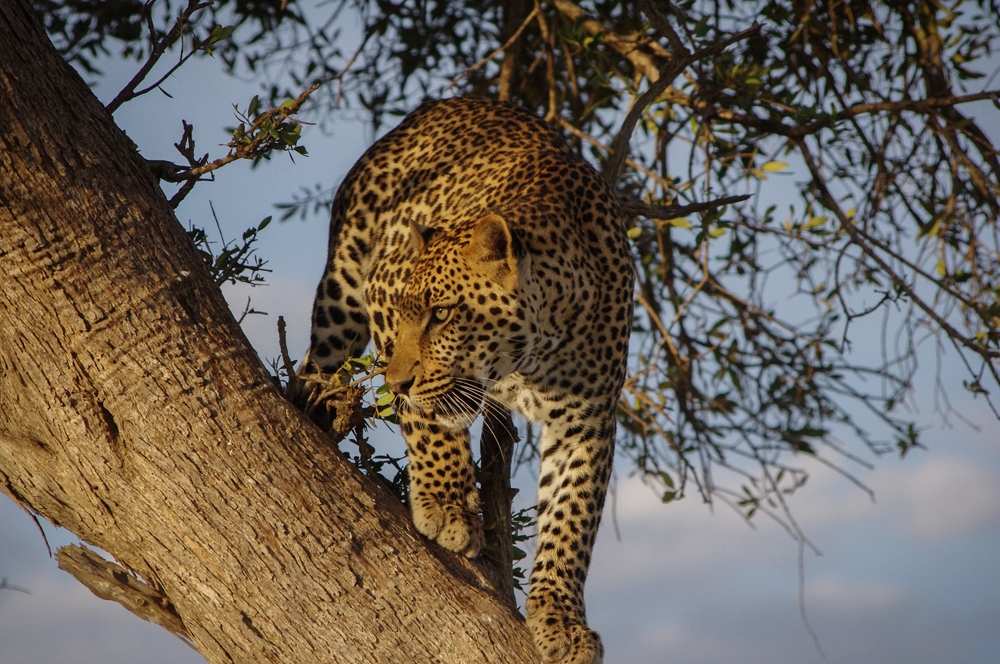 Leopards may target livestock, but with the guidance of various conservation organisations, farmers can implement nonlethal methods for predator control

The leopard is one of Africa’s big five. He is a beautiful cat with a plush golden coat patterned with black and tan rosettes. Coat colours vary according to the range of the leopard and may be anything from a pale yellow to a tawny brown. Although the leopard is one of the smaller ‘big’ cats, he is a powerful, stealthy hunter.

Apex predator
The leopard is the apex predator in his range in the Eastern and Western Cape. Here he plays a key role in maintaining the mountain ecosystem by keeping the numbers of prey animals down, as well as the abundance and densities of smaller predator species. While predators like the Cape lion (extinct in 1858), the brown hyena and cheetah have been absent from the area for many years, the leopard has remained in the Cape. Dr Bool Smuts, director of the Landmark Foundation, says that the leopard’s solitary, nocturnal and secretive nature has most likely been a reason for him outlasting other top predators in the region. As agriculture increases in the area, so the leopards’ habitat has decreased and conservationists are concerned that this majestic cat may eventually meet the same fate as the Cape lion. “The loss of habitat and persecution by humans are the two major factors which cause leopard and other species to diminish and become extinct in most areas,” said Dr Smuts.

SCIENTIFIC NAME: Panthera pardus
DISTRIBUTION: Most of sub- Saharan Africa
HABITAT: Mountain regions, woodlands, rainforests, savanna and grasslands
LIFESPAN: About 17 years
WEIGHT: 35-90kg
DIET: Diverse diet includes small to medium mammals including antelope and baboon; also hare, birds and reptiles.
LIFESTYLE: The African leopard is a nocturnal, secretive cat. During the day they may hide in the branches of a leafy tree or in a secluded cave. Leopards are solitary, territorial mammals.Although quite a silent cat, leopards do purr when content and spit, growl and roar when angry or frightened. Leopards are strong cats and are easily able to drag prey into a tree for safekeeping.
REPRODUCTION: After meeting up with a suitor and mating, the female will carry her cubs for around 90 to 103 days. She gives birth to two to three cubs and moves them between dens to keep them well hidden in their early weeks. By five months, the cubs start to venture out and begin hunting lessons. Cubs leave their mother at two years of age.
STATUS: Near Threatened

Declining numbers
According to Jeannie Hayward, a researcher at the Cape Leopard Trust, there is no definite answer as to how many leopards are left in the Western Cape. “Based on population estimates obtained through camera trapping and collaring studies, and considering their limited available habitat and large home range requirements, there is estimated to be only a few hundred leopards in the entire Western Cape,” she says. “Leopard numbers across South Africa are declining due to illegal hunting for the leopard skin trade, poorly managed trophy hunting and direct persecution in retribution to livestock depredation.”

Farmers and leopards
Human-wildlife conflict is age-old and a highly emotional issue. For the farmers, stock loss to predators directly impacts on income and livelihood. For the predators, livestock is an easy prey target. Leopards and other predators may be trapped or poisoned as farmers try to prevent stock loss. The Cape Leopard Trust is committed to working with farmers to reduce human-wildlife conflict and prevent indiscriminate methods of predator control. “Most depredation events occur when livestock is left unattended in mountainous regions,” explains Cape Leopard Trust researcher Anita Meyer. “When lambs and calves are born out in the open veld, they are extremely vulnerable to leopards.” 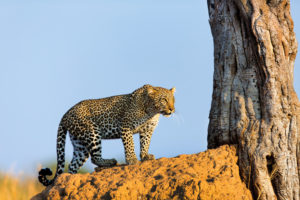 Working for change
Methods of non-lethal predator control include keeping livestock in leopard-proof or guarded kraals at night. The use of livestockguarding
dogs like the Anatolian Shepherd Dog, ostriches, donkeys and alpacas as a predator ‘early warning system’ has also been introduced with good success. “In many areas there has been a positive attitude change towards leopards,” says researcher Jeannie Hayward. “Once the farmer appreciates the role of the leopard in the ecosystem, he is more inclined to try better livestock husbandry practices. The main point is that we need to move away from a system of predator control towards a system of more intensive livestock management, essentially taking livestock off the leopards’ menu. Once it is risky or difficult for a leopard to take livestock, he will rather target natural prey.” Anita Meyer explains that it is important for farmers to understand that killing or translocating leopards is not a good longterm solution. As these are highly territorial cats, when a leopard is killed or removed, especially a dominant male, a vacuum is created and often, a younger, perhaps more inexperienced cat will move into the territory.

Leopard conservation and research
The Landmark Foundation’s Leopard and Predator Project was initiated in 2002 in response to the slaughter of predators, mainly leopards, in the area around Baviaanskloof in the Eastern Cape. The Foundation has grown to become one of the largest landscape conservation projects of leopards in the world and covers more than 4.5 million hectares of leopard habitats in the Western and Eastern Cape. The Foundation has also established leopard rescue, rehabilitation, release and research programmes. Some of the main objectives for research are to determine the population density of leopards in these two provinces, to what extent these populations are threatened and to establish the impact of commercial farming on leopards and the effectiveness of various human-wildlife conflict mitigation efforts. According to Dr Smuts, in the last 10 years the Foundation has been involved in 44 cases where leopards have been killed in conflict with livestock farmers, with possibly more unknown cases. “With less than 400 individual territorial leopards left in the Eastern and Western Cape, this loss to the species, as well as the current genetic isolation small pockets of isolated groups of leopard are experiencing, the populations cannot be sustained,” he says. On a more positive note, the Foundation has successfully rescued 46 leopards, representing a 50% success rate. They have also been able to successfully convince some land users to farm and manage their livestock sustainably, along with leopards on their land.

No spam, notifications only about new products, updates.
PrevPreviousThe Black-footed cat
Next10 cool things about the golden lion tamarinNext
On Key