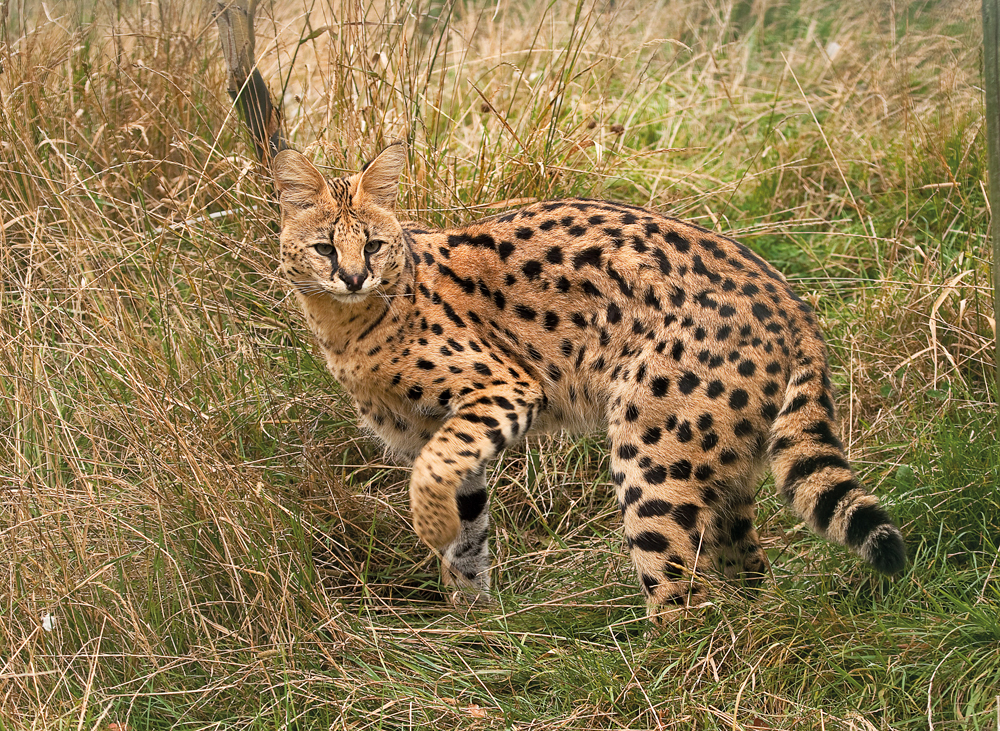 Africa’s leggy beauty: The African serval is a proficient hunter – able to run, pounce on and secure his prey

Did you know that the African serval has the longest legs of all cats relative to body size? He stands between 54 and 66cm tall at shoulder height. The cat’s added height comes from elongated metatarsal bones in his feet. His slender legs enable him to reach a top speed of around 80km/h. He is also a super jumper, able to reach a height of over 2.5m.

The serval – life in the wild
The serval’s territory consists of an area measuring 12 to 20 square kilometres, with the male’s territory being twice the size of the female’s range. Both males and females mark their territories by scratching and urinating on trees and other objects. The serval is apt at communication. He is able to produce a variety of sounds, from a low growl to a high-pitched cry. They also purr and spit.

Appearance
The serval has a lithe body, with tawny-coloured fur and bold black or dark brown spots. Across the shoulders, back and upper leg areas, spots can be plentiful – looking somewhat speckled or merging to form stripes. The tail, reaching almost to the cat’s hocks, is ringed and tipped with black. The serval’s head is small when compared to his body size and he has huge, oval-shaped ears. When seen from the back, his ears are black with small white markings. Males are slightly bigger than females. The serval’s body is perfectly designed for hunting – a long neck to see over the tall grass, big ears to catch soft sounds in the veld, and long legs for chasing agile prey. The serval has keen hearing and will often stand quietly for lengthy periods, just listening to the sounds of the savannah before moving on with the hunt.

Pouncing on prey
Servals are mainly nocturnal, but may be seen during the day in places where there is a lot of other predator or human activity after dark. These are solitary cats and they will only meet up during mating. The serval preys on small mammals, reptiles and birds and is a keen rodent catcher. Once the cat locates his prey, mainly by hearing, he’ll take it down with a mighty pounce high into the air, then strike the victim with the forepaws and claws. Prey is eaten close to where it is caught. Because of his sheer speed, he may occasionally kill a small antelope. Servals are swift and agile and may be able to pluck a bird from the air.

Reproduction
Although the serval doesn’t have a defined mating season, most cubs are born in the spring. The female gives birth to one to three cubs between 72 and 77 days after mating. Cubs are helpless at birth but open their eyes at around two weeks. The young will suck from their mother for about five months. During this period she will allow the cubs to leave the den and start simple hunt training. By one year of age they are ready to leave mom for the solitary life of an adult serval. 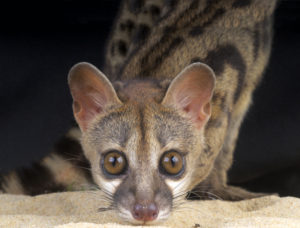 Civets and genets may look like cats and while they are carnivores, they are not felines. They belong to the family ‘viverridae’ which includes the various species of mongoose, the linsang, the fossa of Madagascar and the meerkats of southern Africa. All viverrids have long, slender bodies, elongated heads and necks and tapering snouts. Civets and genets are often mistaken for cats as their spotted coats are very much like that of the black-footed cat and leopard. While most species in the family are solitary, the dwarf mongoose and the meerkat have large social groups. Civets and genets are arboreal hunters, meaning they hunt in trees and on the ground. They are carnivores but some members of the family do supplement their diets with fruit. The African civet (Civettictis civetta), small-spotted genet (Genetta genetta) and the large-spotted genet (Genetta tigrina) are found in South Africa.

No spam, notifications only about new products, updates.
PrevPreviousGerms and Parasites
NextThe Black-footed catNext
On Key