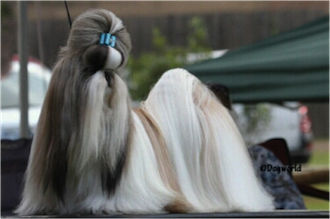 Danny is a real cuddle bug, Adam chases hadedas in the garden, Kinko loves nothing more than playing with his rubber chicken toy, while Finn is happiest when enjoying his favourite snack (which is apple) on his mother’s duvet.

What makes these dogs different to the average family pet? They are the super stars of the South African dog show world. Yet, in spite of their blue bloodlines and impeccable conformation, they are much-loved, pampered pooches as well as great ambassadors of their respective breeds. Says finalist Joy McFarlane: “Showing dogs grips one and the pride we have in our beautiful dogs is no different from the love a mother feels for her children”.

Each year, Animaltalk magazine recognises the achievements of the Top 100 best show dogs in the country, with high accolades going to the dogs who have scored the most points during the course of the year. “This year is extra special though – Animaltalk is celebrating the 20th anniversary of this highly prestigious dog event and we have some exciting announcements to make about involving more great dogs in years to come,” says Johann Theron, editor. On Saturday 14 March, Animaltalk’s Top 100 Awards will be held at the Indaba Hotel in Fourways. The gala lunch will be attended by dog owners and several of the top dogs themselves.

The number one show dog in South Africa this year is KUSA National Puppy ’12 Multiple Ch Midnightdream Thril’f Victory, an adorable Shih Tzu boy owned by Riekie Erwee. Danny, as he is affectionately known, was born on 2 January 2011 and has just turned four years old. He lives in the house with Riekie who has a special dog room where all the show dogs sleep. She has been showing Danny for the past three and a half years and has won many accolades with him, including the Kennel Union of SA’s National Dog in 2014 title. This is also the second year in a row Danny is the Animaltalk Top Dog.

Riekie says “Shih Tzus are a very loving breed, they have a pleasant nature and are full of fun and love toys. They have unconditional affection and will creep into your heart to become your child. They are truly a very special breed. Keep in mind Shih Tzus need plenty of attention and most definitely plenty of grooming.”

Danny’s favourite treat is liver – he goes bananas for this delightful delicacy. He gets brushed twice a day, bathed and blow-dried every four days. He is a long-coated dog and his coat needs extra care and protection. Riekie says she uses Pantene shampoo to get his coat all sleek and silky.

Danny is a very friendly and loving dog. At shows he is more than happy to express happiness when meeting people or new friends (other doggies). He enjoys giving lots of kisses and his favourite sleeping habit is sleeping on his back with his legs up to get a breeze of cool air.

All of the other 99 dogs in the Animaltalk Top 100 have their own quirky habits, special preferences and each is much loved by his or her owners. At the end of the day, no matter how glamorous a dog is in the show ring, he still remains a much valued pet.

Most families own a dog, many of whom are pedigreed. Everyone loves to see how Fido might fare against the Best of Breed. For those with crossbreeds and rescue dogs, it can be fun to recognise the influences of purebreds in their pet’s features. There is also an element of quirkiness in the culture of the showdog world.

Most importantly, the event is much more than just a showcase for beautiful dogs. During the gala lunch, a charity auction was held to raise funds for the South African Guide Dogs Association for the Blind. Training guide dogs to provide owners with independence, is costly so Animaltalk is really proud to assist this organisation with the wonderful work they do.

Animaltalk is a monthly magazine aimed at all those who want to obtain information and learn more about their companion as well as wild animals. Animaltalk places a strong emphasis on pet health, training, behaviour and nutrition and to the relationship between pets and their people. The welfare of animals as well as responsible pet ownership, are core values, reflected in all Animaltalk’s content.

About the South African Guide Dogs Association for the Blind

The South African Guide-Dogs Association for the Blind (GDA) was founded in 1953 by Gladys Evans. The organisation’s mission is to enhance the mobility, independence and dignity of blind and partially sighted people; and to advocate the recognition and protection of the rights of all persons with disabilities. Through the years the GDA has made a huge difference in society by training guide dogs for the visually impaired and service dogs for the physically impaired.