Companion birds losing their feathers- How to deal with it 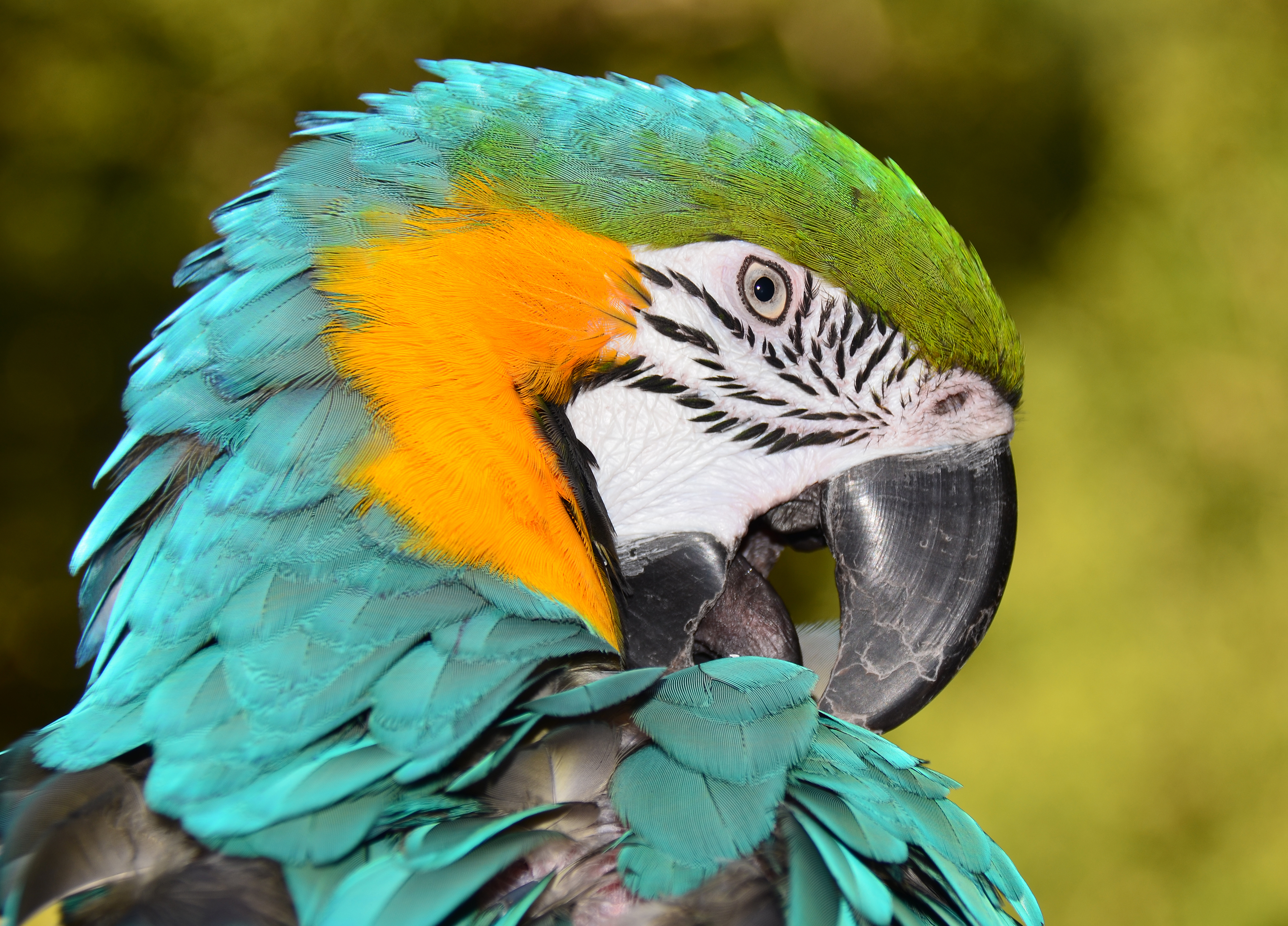 All companion birds, no matter how striking or colourful, lose their feathers at certain times of the year – here is how to deal with this difficult period in the life of your bird.

Moulting is often a frustrating time for owners as well as parrots. Feathers fall everywhere and the unsuspecting owner may think their bird is now feather-plucking, or because of the demand moulting places on the bird, the mood changes may upset the owner as his sweet, loving bird has become a vicious monster.

Moulting is a natural process that happens in all birds, as birds are the only living things with feathers. During a moult new feathers replace old, damaged feathers. Some birds moult gradually throughout the year and owners do not even notice any changes. Others have a heavy moult every other year, but most parrots generally moult once a year at the same time every year.

Moulting is due to hormonal changes in the body and can be affected by temperature, humidity, sunlight and many other factors. Because moulting is controlled by hormones, these same hormones may cause some behavioural changes. Your once playful bird may be quieter than normal with less playing and talking. He may also be cranky and tend to nip or bite more.

Moulting is taxing on the bird, as it requires extra nutrition to grow all the new feathers. Feathers are made up of 90% protein, so adding extra legumes, eggs, chicken or whole grains to the diet can help overcome this stressful and demanding period.

New, growing feathers are called pin or blood feathers. These feathers are encased in a sheath called a quill. You can tell a blood feather from an older feather by the white, plastic look. You may also be able to see a darker colour inside the sheath in bigger feathers. This is the blood that feeds the new feather inside.

If you need to clip your bird’s wings during moulting, you need to be extra careful not to cut any blood feathers. The bleeding may not stop and the whole feather may have to be pulled out. It is better to wait until the moulting has finished before clipping wings, as wing clips during a moult leave new emerging feathers unsupported and they are therefore prone to breaking.

Once the feather has stopped growing, the blood vein inside the feather starts to recede and the quill starts to flake off, revealing the new feather inside. Parrots will preen off these flaky bits, but you may need to help him with the feathers on his head as he cannot reach them on his own. In the wild parrots preen one another, so if he doesn’t have a companion to help him you are going to have to help him instead.

Does it affect flying?

Not every feather is replaced during a moult. A moult can take a few days to a few months depending on the last moult, time of year and many other factors. During a moult a parrot will still be able to fly. As one feather is lost on one wing, the same feather on the opposite wing falls out. This is to help keep a parrot flying as well as balanced. One by one, his flight feathers may drop out, but never all at once.

Bad nutrition and too much artificial light (an interruption of the normal day and night cycle) may result in a so-called abnormal moult, which produces feathers that are discoloured, malformed, or that have retained sheaths. Such a bird may end up looking like a feather duster or worse.

These new feathers can make the bird itch and extremely sensitive to the touch. If you catch a pinfeather the wrong way he will let you know! If he doesn’t allow you to help with the preening, you can still help him by giving him extra baths. If the old sheath becomes too dry and hard it may not be able to fall off on its own, which means the feather can’t open. Try bathing him or spraying him with warm water every other day, or bring him along into the bathroom when you shower or bath, as the humidity in the bathroom will help relieve any itchiness and soften the quills.

Your parrot may have a shaggy, ragged look during the moulting period, but once all his ‘clothes’ have been replaced and the house is swept of all the feathers, you will have a new, radiant bird! 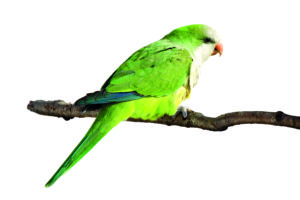 Characteristics: The monk parakeet, also called the quaker, sports a bright green head, wings and back. His face and chest are greyish/white in colour. He also has beautiful blue flight feathers, with hints of green. His beak is orange. Several colour mutations are available.

Temperament: Hand-reared monks are gentle, social birds who enjoy interacting with their humans. They are intelligent and mischievous. The monk is also very active and does require a good selection of toys and space to play. He is a loud bird and can learn to mimic human speech.

Care: Pellets and seeds, with fruit and vegetables. The monk can gain weight, so avoid too many nuts as treats. Pasta and rice can be offered in moderation. 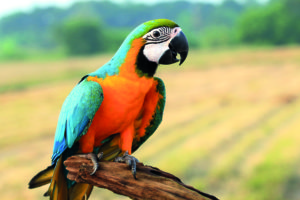 Characteristics: This beautiful bird has electric blue wings and a bright yellow underbelly. He has a bare, white face with a black band running along the cheeks and under the beak. His forehead is bright green.

Temperament: Macaws are sensitive, intelligent, active birds with an inquisitive nature. They need daily attention from their caregivers and time outside the cage for stimulation. Food-finding toys can be great for keeping them busy. A bored, irritated macaw may start to pluck his feathers. They tend to bond with one caregiver.

Care: They need a big cage to stretch their wings. The cage, toys and bird stand need to be sturdy as the macaw’s beak can inflict some serious damage. Diet must be varied. Offer green veggies regularly and keep nuts and seeds for treats. A good quality parrot pellet should be the mainstay of the diet. 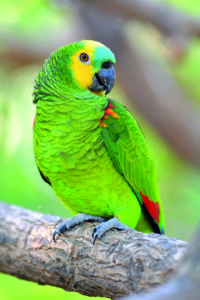 Appearance: The blue-fronted Amazon has lime green body feathers with a blaze of turquoise on his head, along with some yellow colouring on the crown and cheeks. He also has red feathers at his wing bends and some yellow on the shoulders and leg socks. Some red colouring may be found in his flight feathers. Patterns and shading often vary in individuals. Feet are grey and the beak is black.

Temperament: An excitable bird, the blue-fronted Amazon is an intelligent parrot who is able to mimic a variety of sounds – a true performer! He has a mild temperament and enjoys plenty of attention. They are good talkers but can also be very vocal, and are thus not well suited for smaller accommodations.

Care: Like other Amazon parrots, the blue-fronted needs a good quality diet to stay healthy. He’s also a very active bird and needs ample time outside his cage to play and exercise. Provide plenty of stimulating climbing structures and chew toys. 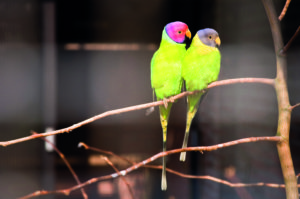 Characteristics: Both sexes sport a body, abdomen and wings in various shades of green. The male has a deep purple/plum head with a black ring around his neck, widening under his beak to form a collar. The centre tail feathers are blue in colour and the side tail feathers are yellow and green. The upper beak is bright orange in the male and pale yellow in the female. The female’s head is a light shade of purple/grey.

Temperament: Plum-headed parakeets are generally quieter than other parakeet species and are therefore more suitable for flats and townhouses. They are social, with a gentle nature and birds who are carefully handled become very tame. They are intelligent and do learn to talk.

Care: They should be fed on a good quality diet of seed and pellets (for small parrots) and supplemented with fruit and vegetables. They will also enjoy sprouted seeds and leafy green vegetables. Cooked chicken in moderation can be offered, and occasionally shelled nuts like pecans or almonds.

No spam, notifications only about new products, updates.
PrevPreviousHow to puppy-proof your home
NextQ & A: What exactly is torsion or bloat and why are mostly bigger dogs are affected?Next
On Key