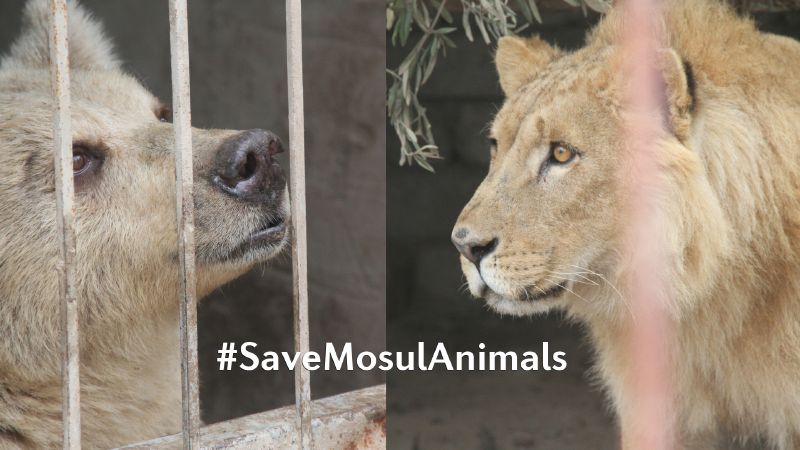 A rescue team from the international animal welfare organisation FOUR PAWS has succeeded in entering the crisis-ridden city of Mosul in Iraq, with the aim of evacuating the few surviving animals of the Motazah Al-Morour Zoo. The Iraqi military approved a timeslot of a few hours in order to enter the zoo with a local vet and support from Iraqi military forces, to prepare bear, Lula, and lion, Simba, for the transport, to load them onto an animal transporter and to take them out of Mosul.

Dr. Amir Khalil, veterinarian and head of the FOUR PAWS mission: “We have to act quickly, because Mosul is a dangerous crisis area. Lula and Simba don’t have any chance of survival unless we can take them out of the zoo and bring them to safety.” Dr. Khalil had already been in the Mosul Zoo in February, in order to examine the bear and the lion, to treat them and to organise with volunteers for their regular feeding.”

Apart from bear, Lula, and lion, Simba, FOUR PAWS was informed a few days ago that more animals were brought

to the zoo: three monkeys, three peacocks, two goats and a pregnant horse. Dr. Khalil: “We are trying also to provide help for the other animals, but, unfortunately, we only have limited capabilities with the short time slot we were given. Large wild animals such as bears and lions, who are kept in desolate cages, can also easily pose a threat to humans.”

For the moment, the FOUR PAWS team will bring the animals to Erbil for an intermediate stopover. From there, the animal welfare workers will organise the further transfer to an appropriate animal rescue centre, which can offer the animals a safe home.

Dr Amir Khalil has already operated in various crisis zones, medically treating animals, organising food and, last time, in Gaza 2016 even evacuated a whole zoo. Now, he also wants to give the animals in Mosul, caught between the frontlines of human conflicts with no chances of help, hope for a new life.

The zoo was hit by bombs and severely damaged during an armed conflict between IS and the Iraqi forces over a month ago. About 40 animals died – some starved, others were directly killed by the bomb attacks, others fled from their damaged cages. FOUR PAWS was the first NGO to receive a permission to enter Mosul.

FOUR PAWS set up a donation page, where animal lovers from all over the world can help to save the animals from a cruel fate with their donation:

Regular updates about the mission can also be found on the FOUR PAWS channels:

No spam, notifications only about new products, updates.
PrevPreviousClimbing for CLAW
NextHow To Create a Cat-Friendly living spaceNext
On Key