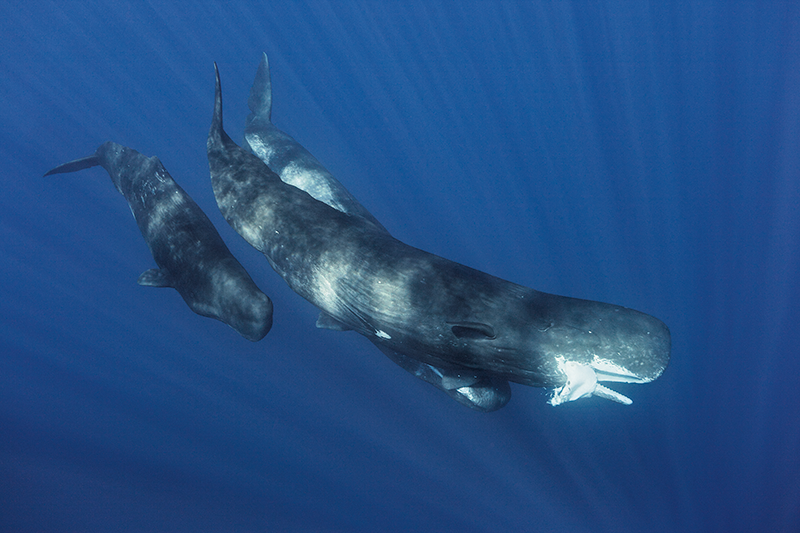 Hefty pirate. At 18m in length and weighing a mammoth 50,000kg, the sperm whale is the planet’s largest predator. This big-bodied ocean resident hunts in deep waters

They have enormous heads. In fact, the head of a sperm whale takes up about one third of his body. The biggest part of that is consumed by the so-called ‘spermaceti-organ’. This organ, on the top of the whale, is filled with about 3,000l of a white wax-like substance. We’re not quite sure yet what it is for. It could play a part in diving, fighting or the pointing and reflecting of sound that these animals make. The enormous head is also home to the biggest brain in the animal kingdom, weighing an incredible 9kg. A human adult’s brain weighs between 1.3 and 1.4kg.

Little feeding fish will often joyride on sperm whales and other big ocean residents. Feeding fish are bad swimmers and this saves a lot of energy. The fish devour the parasites off the host’s skin and anything else the whale will mess while eating.

Sperm whales communicate with each other through the so-called ‘codas’. This is a series of click sounds that they emit. These codas vary from one click per 10 seconds to 90 clicks per second.

The weight of a sperm whale

How deep they dive to find prey

The lifespan of a sperm whale

The average length of mature males

He will dive with great ease to a depth of 1,200m during his hunt for his favourite delicacy, squid. Sperm whales are mammals and so they have to surface for air. How deep they can dive depends on how long they can hold their breath. The mammals regularly take a dive of up to 90 minutes. The longest dive ever witnessed by whale researchers was 138 minutes.

Fight for the ladies

These mammals live in groups of two to 40 females and adolescent males. Bachelor males will join them during the mating season. Of course they all want the best lady and they are not shy to fight for her, using their teeth and tails. And that’s why they have all those scars on their heads.

These guys can take enormous bites. The bottom jaw alone contains between 18 and 28 teeth, each tooth weighing in at almost 1kg. The lower teeth fit exactly in the spaces of the upper jaw. Not a very functional system for eating. But most of his meals are swallowed whole. This animal will gulp up his victim in one go.