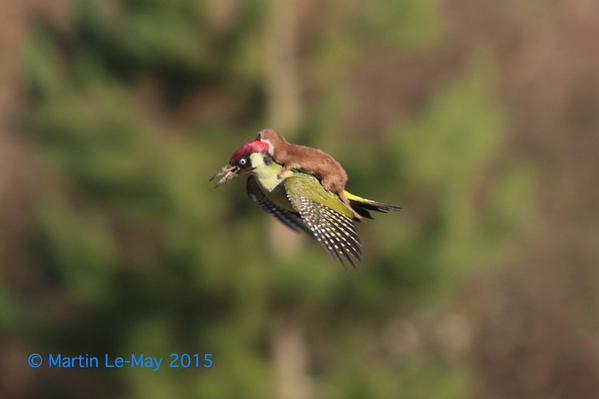 Can weasels fly? According to an image captured by amateur photographer Martin Le-May, they can if they hitch a ride on the back of a woodpecker. The picture shows a Least weasel clutching on the back of a European green woodpecker, likely as a result of a predatory attack gone awry.

Le-May told BBC News he snapped the photo Monday afternoon while visiting Hornchurch Country Park in East London. In fact, his presence may have saved the bird’s life.

Is the Photo Real?

Is the photo a fake? Hany Farid doesn’t think so. Farid is a professor of computer science at Dartmouth College, in New Hampshire, who researches digital forensics and image analysis. Farid said that while the image’s low resolution makes performing a detailed analysis difficult, there are several other factors to consider. For starters, because the weasel is virtually hugging the woodpecker, forging such an image would be extremely challenging.

“This would have required a nearly perfect and coincidental alignment of the two animals in their original photos so that they could be composited together,” said Farid. “This type of forgery is therefore more difficult to create than, for example, two animals simply standing side-by-side.” Finally, Farid said there doesn’t seem to be any obvious lighting, color, focus, or quality differences between the weasel and the bird.
“Combined, I don’t see any evidence that the photo is not real,” he said.

If the image isn’t a forgery, then what circumstances might have led to a weasel and woodpecker recreating the story of the scorpion and the tortoise?

David Mizejewski, a naturalist with the National Wildlife Federation, said European green woodpeckers feed on ants, which means they spend a lot of time on the ground. This type of foraging behavior makes the birds vulnerable to attack from predators—in this case, a hungry weasel. Least weasels are carnivores, and while they typically take down mice and voles, these tiny predators have also been known to prey upon animals much larger than themselves, including rabbits, frogs, and birds.
“The least weasel’s signature move is to sever the spinal cord of its prey with a bite to the neck, which is exactly what we’re seeing in the photo,” said Mizejewski.

“The natural world is filled with wonders,” said Mizejewski, “and we have the chance of observing them firsthand if we get outside to experience them.”

No spam, notifications only about new products, updates.
PrevPreviousAnimals of Cape Town need you
NextRussian Scottish Terrier wins group at CruftsNext
On Key