How to manage moulting birds 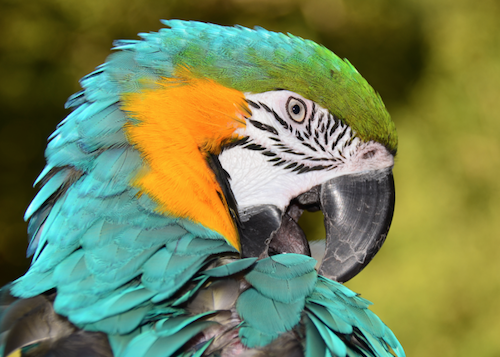 Moulting is a natural process that happens in all birds, as birds are the only living things with feathers. During a moult new feathers replace old, damaged feathers. Some birds moult gradually throughout the year and owners do not even notice any changes. Others have a heavy moult every other year, but most parrots generally moult once a year at the same time every year.

Moulting is due to hormonal changes in the body and can be affected by temperature, humidity, sunlight and many other factors. Because moulting is controlled by hormones, these same hormones may cause some behavioural changes.

New, growing feathers are called pin or blood feathers. These feathers are encased in a sheath called a quill. You can tell a blood feather from an older feather by the white, plastic look. You may also be able to see a darker colour inside the sheath in bigger feathers. This is the blood that feeds the new feather inside.

If you need to clip your bird’s wings during moulting, you need to be extra careful not to cut any blood feathers. The bleeding may not stop and the whole feather may have to be pulled out. It is better to wait until the moulting has finished before clipping wings.

Once the feather has stopped growing, the blood vein inside the feather starts to recede and the quill starts to flake off, revealing the new feather inside. Parrots will preen off these flaky bits, but you may need to help him with the feathers on his head as he cannot reach them on his own. In the wild parrots preen one another, so if he doesn’t have a companion to help him you are going to have to help him instead.

Does it affect flying?

Not every feather is replaced during a moult. A moult can take a few days to a few months depending on the last moult, time of year and many other factors. During a moult a parrot will still be able to fly. As one feather is lost on one wing, the same feather on the opposite wing falls out. One by one, his flight feathers may drop out, but never all at once.

Bad nutrition and too much artificial light may result in a so-called abnormal moult, which produces feathers that are discoloured, malformed, or that have retained sheaths. Such a bird may end up looking like a feather duster or worse.

These new feathers can make the bird itch and extremely sensitive to the touch. If you catch a pinfeather the wrong way he will let you know! If he doesn’t allow you to help with the preening, you can still help him by giving him extra baths. Try bathing him or spraying him with warm water every other day, or bring him along into the bathroom when you shower or bath, as the humidity in the bathroom will help relieve any itchiness and soften the quills.

Your parrot may have a shaggy, ragged look during the moulting period, but once all his ‘clothes’ have been replaced and the house is swept of all the feathers, you will have a new, radiant bird!

The full article appears in the June issue of AnimalTalk.

No spam, notifications only about new products, updates.
PrevPreviousCancer is no longer a death sentence
Next10 cool things about the fish eagleNext
On Key