Why the UK doesn’t eat dog meat, but people in China do 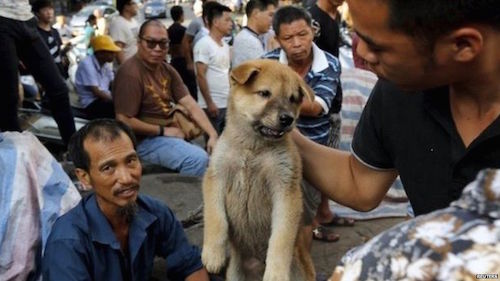 But why do some of us crave a slow-roasted lamb shank for Sunday lunch, and yet feel sick at the thought of any circumstance where we would have to eat dog? Compare that feeling to China, where it’s thought around 10,000 dogs will be slaughtered as part of an annual dog meat festival in Yulin.

You can legally eat dog meat in the UK and it’s claimed to be a good source of protein, so why don’t we? Put simply, experts have told Newsbeat that in the West there is some sort of “emotional, psychological barrier” which stops us.

Dogs are our pets

To feel connected to other social beings is very important to humans, and in the West that role is often filled by cats and dogs. Lecturer in Developmental Psychology at the Open University, Dr Thalia Gjersoe, says dogs are particularly good as pets because they have a lot of psychological skills which other animals don’t. For example, dogs can read and react to human body language. As a result, humans keep dogs in their homes and form “strong social bonds” with them.

However, in China, fewer people have dogs as pets, and instead use them as work animals.

Research suggests that the more we like a person or an animal, the more complicated we think their minds are. Humans can even become emotionally attached to certain objects, like a teddy bear, and as a result treat it as though it has thoughts and feelings.

“We think of dogs as having very complex minds,” Dr Gjerseo explains.

That’s why the thought of eating them is disgusting, in the same way we would think eating one of our friends is disgusting.

South Africans see dogs in the same light as people from the UK – we see them as people.

Our love of dogs isn’t the only thing stopping us from eating them; it is claimed the feeling of “disgust” and fear of being judged by others influences our eating habits too.

In an article for The Guardian, science writer Dr Kathleen Taylor says: “To most Westerners, eating your dog is an abomination, end of story. That’s the rule our culture happens to follow.

Disgust is contagious. We catch it easily from others, and it tells us what’s acceptable and what isn’t.

“Disgust, by contrast, keeps you clean and pure, up on the moral high ground. It protects you from being punished by your community, or worse, being seen as disgusting yourself.” However, what Westerners deem “disgusting” can also vary; most British people are against eating horsemeat, however it’s estimated that around 18,000 tonnes of it is eaten in France every year.

The Chinese tradition of eating dog meat dates back around five hundred years and is believed to ward off the heat of summer.

Adam Parascandola is from the Humane Society International and visited the festival in Yulin, which started in 2010. Speaking via Skype, he tells Newsbeat he saw dogs tied up, in cages and being killed.

We went to a slaughter house and a truck had just arrived with hundreds of dogs on. I witnessed a man just hitting and hitting dogs

Nearly four million people have signed a petition calling for the festival to be banned, including many within China where attitudes appear to be changing, particularly among younger generations.

National animal rights groups within the country are trying to stop the dog meat trade while authorities banned restaurants from selling dog meat during the Beijing Olympics.

No spam, notifications only about new products, updates.
PrevPreviousSave Julia and Zoya from a life of cruelty
NextAnimal shelter in Johannesburg gets robbedNext
On Key